Resigning from my Ambassadorship in Girdwood is probably where my adventure really began, although of course, that was part of this chapter in my life. Riding away from the Alyeska Hostel on my bike felt like I was leaving home, beginning all over again. In a way it became a home. It is a warm, comfortable and welcoming place to be. I had the opportunity to sit and talk with Ashley who manages the hostel and of course, writing came into the conversation. She mentioned she enjoys writing and has toyed with the idea of writing a book someday. I told her what was told to me a few years back… that it starts with the first page, the first paragraph, the first sentence, the first word, the decision to do it and the consistency to follow through. Before I left, Ashley told me that I inspired her. I appreciated that, but I responded that inspiration is like potential… it means nothing if you do nothing with it. Yeah, ok… I threw some Catholic guilt at her, but I did it to hopefully get her to make that commitment and write that first sentence. After all, the stories are being fed to her. They are stories of travelers from all over the world, all on different adventures, with different backgrounds and different stories to share with her before they drive, walk or ride away from the Alyeska Hostel. 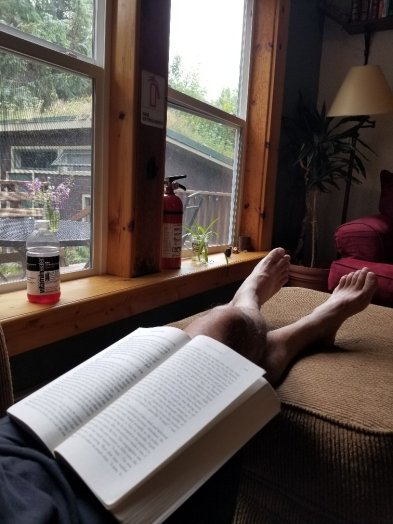 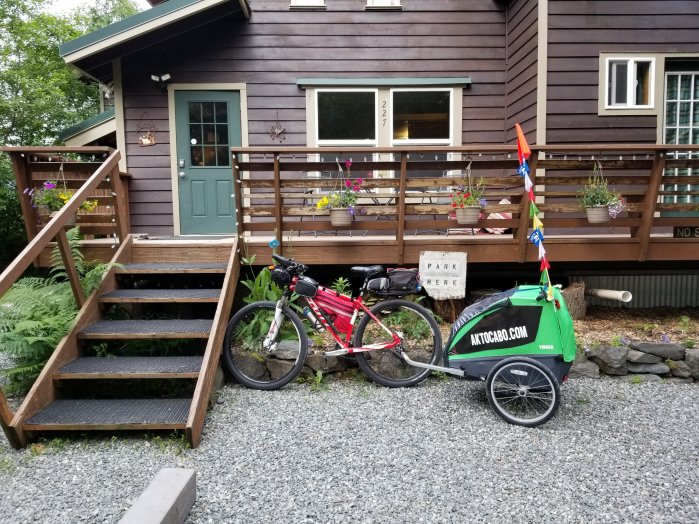 When I reached the highway, I was welcomed by the headwinds once again but I felt a little more prepared for them as my quads had recovered while staying in Girdwood. Fortunately, I only had to fight them for 15 miles to Portage where I boarded the train to Whittier. The train ride was wonderful as I was able to bounce back and forth from side to side of the train taking pictures of the majestic mountains and frozen ice blue glaciers. I didn’t see any wildlife, but the landscape was amazing in itself. 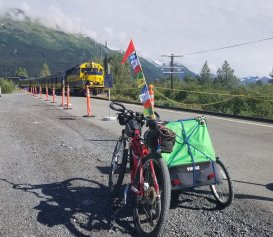 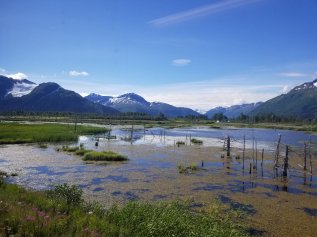 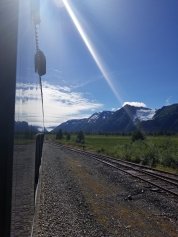 Whittier is definitely a small town. I saw all of it within half hour of deboarding the train. The challenge was trying to entertain myself for 10 hours until the ferry pulled out of port. I visited all 5 gift shops, devoured a chunk of fudge from another one and had a salmon fillet burger at a little café recommended by a local. After that, I found myself laying back on a picnic table using my backpack for a pillow. To my surprise, I was quickly woken up by a disturbance. It may have been snoring, but there was no one else around so I couldn’t be sure.

Eventually, boarding time came around so I checked in at the ferry terminal. Not long after, I was approached by a guy who asked if I was cycling. He was too, but he started in Deadhorse, Alaska and will be riding to Panama. That gentleman is Daniel, from Switzerland. You can follow his journey at http://www.ddurot.blogspot.com. Daniel has done many other bicycle touring adventures in the states and all over Europe. As we were waiting to board the ferry, we were approached by other bicycle touring participants – Cary and Sheila from Florida (www.crazyguyonabike.com Search for “Hitting the Road”). They rode from Florida, explored Alaska and are now on their way back to Florida. They too have cycled all over the states and Europe. So who lied to me and told me that riding from Alaska to Cabo was far? I guess we all have to start somewhere!

The ferry has turned out to be a wonderful way to camp/travel. There are two areas on the solarium level (both sides of the boat) which are enclosed areas with great views. This is where bicyclists, hikers and anyone else with a tent can set up their campsite. Maybe I was just tired, but the gentle rocking of the boat and my air mattress made me sleep like a baby. 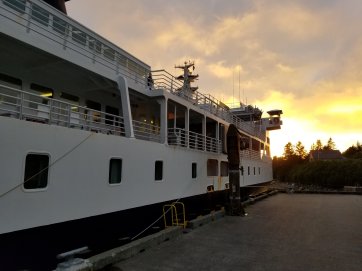 I’d better cut this short as we pull out of Juneau – before I lose service! Thank you for following me! I’ll be sure to let you know that I have learned there’s a good chance Santa doesn’t really exist! 🙂

3 thoughts on “Planes, Trains and Automobiles… Bikes and Boats too.”