As each day provides something new to see, new to learn and new people to meet, yesterday and today were flush with newness. Yesterday began with packing up our “Boat People” existence, our camping sites on the top deck of the Kennicott ferry. Cary & Sheila are proceeding to Prince Rupert and then taking a train to Jasper and Banff, Canada before continuing their bike touring adventure back to Florida. Daniel and I explored Ketchikan until the last daily cruise ship pulled out. The ship horn sound that echoed through town not only means passengers must reboard quickly, it signals most shop owners that their long day has come to an end. This can be surprising for the tourists who are staying a little longer than most.

Daniel had reservations for a ferry to Prince Rupert as well. He is probably on his bike heading East as I type. I considered riding with him, but the reality is, I’d probably slow him down. He has bike toured heavily in the past in many parts of the world. He has two “real jobs” in Switzerland. He is a P.E. Teacher through the school year and then a Ski Instructor in the Winter. He has a rough life filled with kite boarding, cycling, skiing, snowboarding, golfing and running from “Cougars” who attempt to tame his adventurous soul. Considering Daniel is heading to Panama and has to be back in Switzerland by late January, we may end up riding together later next month as our paths will be going in the same direction, at least until La Paz or Cabo.

Today it is raining in Ketchikan, “The Salmon Capitol of the World.” I opted to stay here a few days until the next ferry to Prince Rupert pulls into port. As it turns out, according to locals, I couldn’t have picked a better weekend to stay. Tomorrow is their annual Blueberry Festival where I will have the opportunity to meet many local Vendors, Artists and Craftsmen. I’m looking forward to this opportunity since this morning was spent going in and out of the many galleries and shops meeting many interesting people.

One of the people I met was Okichie who works at Alaskan Heritage Gems and Arts http://www.AKHERITAGE.net. Okichie showed me some Wolly Mammoth Ivory and Cave Bear knuckle carvings and knives. An amazing traditional use of rare materials that can only be harvested by Alaskan Natives. One of the many thoughts that came to mind while pedaling, was how much I would like to find an eagle feather. Well, I was informed that unless you are a native, you can be fined $10,000. Well, I guess I’ll take a picture instead if I come upon one. 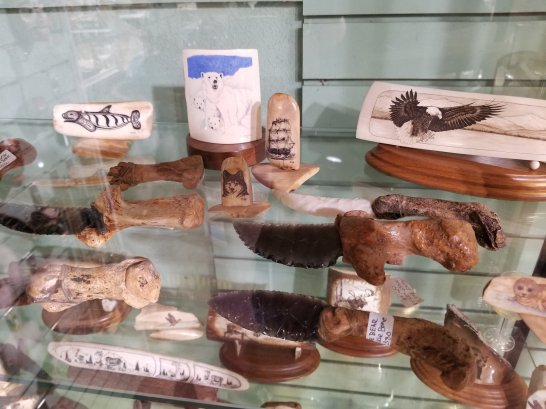 Another shop I went into was Rail Creek LLC, where I met Travis who carves totem poles and his cousin Cameron who is a marble sculpturer. Travis schooled me in the history of totem poles and how they can tell stories or have spiritual representations. Totem poles were once a form of story telling for the Haida tribe who did not have a written language. Cameron educated me in the art of sculpting marble and how much time is spent hand polishing the sculptures. Sadly, the store no longer have a website because of international tourists who meticulously photographed their creations and started copying them.

Speaking of “Boat People,” I met one of the most creative people I’ve ever met who told me that he was an authentic “Boat Person” – not in a derogatory fashion, but in a factual sense. Eddie Lee was born in Vietnam. After the fall of Saigon, his family decided they must leave for any kind of a future. They attempted to leave four times and for one reason or another, they weren’t able to get away. It took the fifth attempt by boat to escape. After days on the water, the engine died and 35 people floated with the wind and sea as controllers of their destinies. Eddie told me how they survived last the few days on one gallon of water for all 35 people. They were allotted a capful at a time. As fate would have it, they floated into an oil derrick where they were helped and pointed in the direction of Malaysia. From Malaysia they were offered political immunity and were brought to the United States.
Eddie told me of his placement in Seattle and how he took the time to explore the Northwest coast up in to Alaska. This is where he discovered something about himself… he could see images in various materials. This led him to using the little money he had to buying carving tools and taught himself how to expose what he could see. Within 5 years Eddie opened his first Art Gallery in Seattle and is now recognized as a World Famous Master Sculptor. The pieces I saw are carved in Mammoth Tusks, Walrus tusks, Big Horn Sheep horns, marble, stone, gems and various other materials. As I type, I can only hope my photos give you a inkling of the delicate, detailed carvings I was able to see with my eyes. As far as the giant carved Wooly Mammoth tusk, it’s not for sale. Eddie has been offered sums that most people can retire comfortably on, but some things are so precious – you just can’t put a price on them… and sometimes it takes age and time to expose that truth to us. http://www.ALASKA-FINEART.com.

And so tomorrow I will have the opportunity to meet others who are on their own journeys, whether it be via bicycle, backpack, boat or carving tool. Thank you for allowing me to share this world that continues to unfold as I pedal (not paddle) through it.

6 thoughts on “We Are All On Our Individual Journeys”