Yesterday was an interesting birthday for me. In the past, I’ve done various things such as snowboarding, motorcycling or spending time with family or friends. Yes, yesterday was different… I pedaled 27 miles from Ensenada toward San Felipe, and most of those miles were uphill. A butt kicking kind of day.

As I was pedaling away, many thoughts crossed my mind. Thoughts of people from the past, people from the present, dreams, goals and things to be done to create the future I’m manifesting. The question that came to me somewhere near the first kilometer mark was why I was doing this. While my legs were burning and I was questioning my place in this world, my thoughts turned to gratitude. At 56 years old, I am able to pedal mountains through little one-horse towns in other countries to challenge myself. How could I not be grateful for this ability?

Somewhere near the 20th mile, I saw something unusual for late December… a Monarch butterfly fluttering around me, making its presence known. I see these butterflies regularly – well, since my mom passed away. I tend to think it was her letting me know that I would crest that mountain road and not to worry about the vultures circling above. I know I was smelling fresh, but I didn’t think it was that bad! Good thing I have a terrible sense of smell!

As I came around one bend, I saw a street sign that got me very excited! It was a sign indicating a major decline ahead. I couldn’t help but think that it was all downhill from there and I would catch up with Giuseppe and Yvan. It was a wonderful period of time, feeling the cool wind blow over my sweaty body while clocking 34 mph on my bike speedometer… 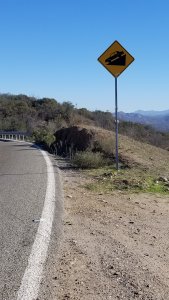 until I approached another sign. It looked like the same sign, but as I rolled closer, I saw the differences… it was a Universal symbol for an incline ahead and there was a painting of the Virgin Mary praying on a rock right behind the sign. How should that spiritual sign be taken? Mary is praying I’ll make it to the top without having a heart attack? Or maybe it was just the sick humor of an artist who thought it would be fun to mess with the bicycle riders who are foolish enough to ride on these steep, shoulderless mountain roads? 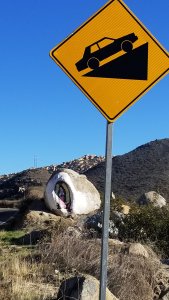 All in all, I will go with the Virgin’s prayers as I did make it to the top and down the other side… without having a heart attack on my birthday! Speaking of my birthday, I was lucky enough to have Giuseppe and Yvan present me with a cupcake that had a fountain type firework on top and a picture of the unicorn I always knew existed. What more could I ask for?

Last night we stayed in a campground in Ojos Negros, translated as Black Eyes. We had no cell service and it was pretty damn cold, but we survived. Somewhere between the neighborhood dogs barking late into the night and the roosters signalling a new day long before the sun rose, I was able to get some sleep thanks to my Ipod.

After packing up, I enjoyed a cup of coffee and a couple of tacos for breakfast at a little restaurant that has Wi-Fi. A great way to start another wonderful day! 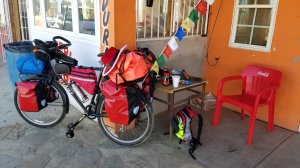 The day resulted in another 55 miles pedaled toward San Felipe. The last few miles were a pleasurable downhill run into Lazaro Cardenas. Giuseppe and Yvan opted to camp on a nearby ranch that overlooks the valley, but being the not-so-purist of a bicycle tourist, I opted for a room at a little hotel. I definitely needed a shower after two days of hill climbing. With my riding clothes smelling extremely ripe, I asked the maid if they wash clothing. They do – for $4. What a deal! Tomorrow, I won’t be offending everyone I come in contact with! How wonderful is that! But I did have to pull out my stove to have an all carb dinner for energy tomorrow.

Thank you all for following me. I guess we are all adventurers at heart, sometimes excited about the unknown and sometimes afraid of the unknown. Have a great day!