From Puertecitos we continued down torn up roads along Highway 5, the road that runs along the eastern side of Baja. Looking ahead, I could see we were riding into a storm. I did feel some raindrops, but nothing substantial. Having left Puertecitos first, I stopped along the highway and spoke to a passerby. I asked about the little village I could see not far off the highway. He told me that it was a fishing village and the people would be hospitable. Once Giuseppe and Yvan arrived, we discussed it and Yvan wanted to keep pushing forward into the storm. I, on the otherhand, wanted to call it a day and wait out the storm. After a while, he agreed and then we pushed our bikes down a sandy riverbed to ask about staying there. 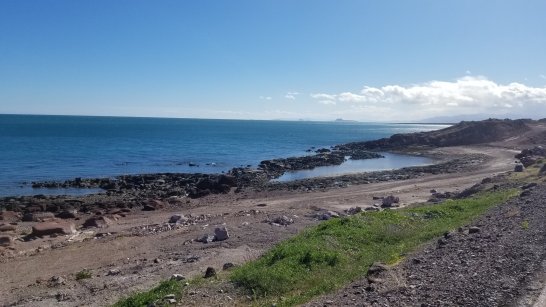 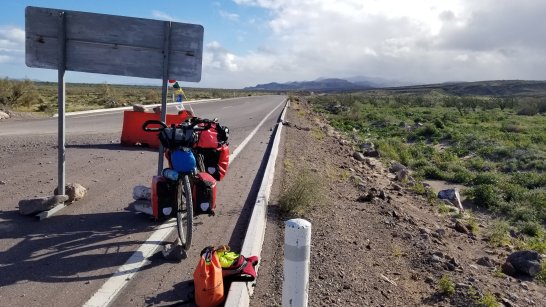 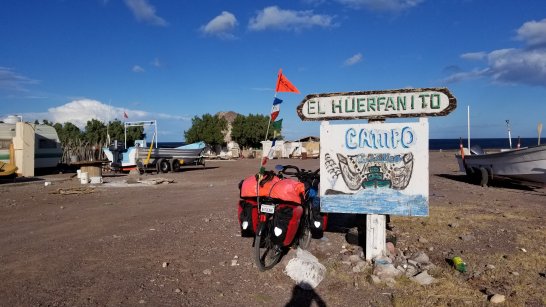 This is where we met Nacho, the owner of the land, otherwise known as El Huerfanito. We had to wait a little while because he was out fishing. When he brought in his boat, he showed us his catch and let us know where we could camp. After we set up camp, Giuseppe and I went back to ask him if he wanted to sell any of his fresh fish, and he did. We bought 3 fish for $5 and grilled them over the fire. As expected, they were delicious.

The storm ended up going around us. Had we gone further south, we would have been drenched. The storm also went north and hit hard. Through the night, the wind howled and blew up to 50 mph. By this morning, the sky was clear and perfect for pedaling. The first thing I did was take sunrise shots of the beautiful bay.

The plan was to stop at Gonzaga Bay, which we did, but once again Yvan wanted to keep pushing forward once he gathered what he wanted from the little store. My personal journey is to enjoy the journey, not try to set a record or do it just to say I did. Giuseppe wanted to stay, but for some reason, he then wanted to ride into the desert knowing it would be 2-3 days of nothing. Frustrated, I decided to hit the road and consider my options. I had already been thinking of parting ways with the guys and enjoying this bike touring experience, so the time had arrived. I guess three is a crowd since I wasn’t interested in Brokeback Mountain Biking. I pedaled about 10 miles into the desert until the paved road ended. It didn’t turn into a short section of gravel, but a full blown dirt and rock road that had never seen gravel or pavement. This was definitely not the bike touring I signed up for! My Scott mountain bike would be much more appropriate.

I’ve said it before, and I’ll say it again… I’m not a bike touring purist. Since this journey began, my bike(s) and I have been on planes, trains, ships and rental cars, but today was a first. I had the opportunity to experience what it would be like to be in the Baja 1000. Not long after I started down the dirt road, a truck came up behind me pulling a flatbed trailer set up for carrying dirt toys and I asked how far it was to the next town. The lady passenger said a couple of hours by car, which meant a few days by bike. I was hoping for a better answer, but the truth is the truth. I asked if I could get a ride, that I would gladly hang on the trailer. They agreed and so I loaded my bike, laid it on its side and hung on to the tie down straps as Sergio and Lupe blasted down the desert road. We ended up stopping a Coco’s Corner, a well known middle of nowhere place where people can camp, get water and beer. Coco is an amputee from diabetes and well known through the off road community for his well decorated little hole in the wall so I had to take a picture with him. 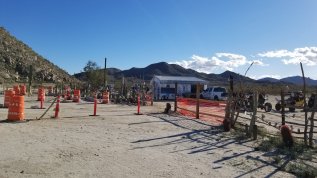 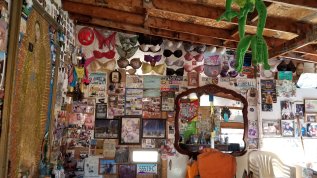 Before hitting the dirt road, I was passed by 4 Razor type dune buggies who waved at me. As it turned out, Sergio was driving their chase truck in case something happened to one of their vehicles. I did’t get his name, but the guy who seemed to be in charge said that I should stay on the trailer and instructed Sergio to take me to Hwy 1. Even better, they took me south to the junction for Bahia de Los Angeles, another place to explore someday. I ended up camping behind a little Mexican restaurant, happy as can be considering I won’t be spending the next 3 or 4 days distroying my bike on that dirt road. I think Giuseppe and Yvan will be a little surprised to see what they were rushing toward. Me, I’m going to head south to the beautiful beaches and enjoy my journey.

This morning I hit the road after the fog cleared. Seeing the cactus in the fog illuminated by the rising sun was an unexpcted treat.

I saw something this morning that wasn’t what I thought it was. Living in Southern California artists leave their mark everywhere such as the steel dinosaurs in the desert south of Palm Springs and the steel horses along the road south of Temecula. As I pedaled south, I saw these great replicas of large birds with open wings placed on top of giant Saguaro Cacti. There were about 10 of them. Then I thought, “Wait a minute! Why would some artist do this way out here in the middle of nowhere? I need a closer look.” So I parked my bike and walked toward the figures and Surprise! Surprise! They were live Turkey Vultures holding their wings open. According to Google, they were sunbathing! That was a first for me!

After pedaling some hills, one being the steepest hill I’ve ever climbed, I ended the day in Rosarito Sur Baja California – Meaning Rosarito in the southern part of Baja. Considering rain was in the forcast, and it’s raining as I type, I found a room with WiFi for only $20! After unpacking, I went to take a shower and understood why I received such a deal on the room. Showerheads are overrated anyway. After showering, I decided to shave (since it had been a week since the last bout with a razor) and was a little annoyed that the water would not get hot. Having a curious nature about me, I had to look under the sink. Creative plumbing! No wonder it wouldn’t get hot! I think they spent their plumbing budget on their new extrior paint! 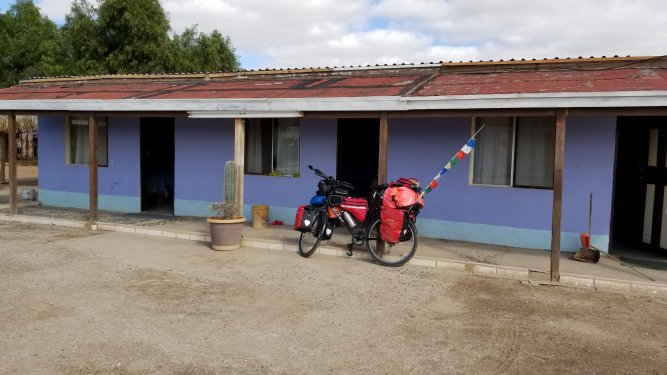 Thank you for following me on this journey. Please make comments below and if you’re new here, click on the Follow Me link and enter your email address to receive my upcoming posts. Also, if you click on the pics I post, you can see the whole photo. Have a Great Day!